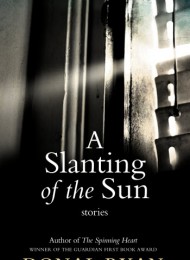 A Slanting of the Sun

An old man looks into the fearful eyes of a burglar left to guard him while his brother is beaten; an Irish priest in a war-torn Syrian town teaches its young men the art of hurling; the driver of a car which crashed, killing a teenage girl, forges a connection with the girlâ€™s mother; a squad of broken friends assemble to take revenge on a rapist; a young man sets off on his morning run, reflecting on the ruins of his relationship, but all is not as it seems. Donal Ryanâ€™s short stories pick up where his acclaimed novels The Spinning Heart and The Thing About December left off, dealing with the human cost of loneliness, isolation and displacement. Sometimes this is present in the ordinary, the mundane; sometimes it is triggered by a fateful encounter or a tragic decision. At the heart of these stories, crucially, is how people are drawn to each other and cling on to love, often in desperate circumstances.In haunting and often startling prose, Donal Ryan has captured the brutal beauty of the human heart in all its hopes and failings.