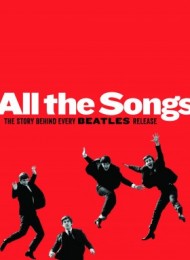 Every album and every song ever released by the Beatles—from “Please Please Me” (U.S. 1963) to “The Long and Winding Road” (U.S. 1970)—is dissected, discussed, and analyzed by two music historians in this lively and fully illustrated work.

“[r]ock-solid stuff…Essential for Beatles fans and a pleasure to read.”
-Kirkus Reviews

After more than 50 years and a billion records sold, The Beatles’ popularity remains undiminished. In All the Songs, music historians Jean-Michel Guesdon and Phillipe Margotin, with consultation by composer and producer Scott Friedman, delve deeply into this endlessly fascinating and seemingly inexhaustible subject.

Drawing on decades of research, the authors recount the circumstances that led to the composition of every song, the recording process, and the instruments used. Organized chronologically by album release and illustrated with 600 black & white and color photographs, this information-packed book provides readers a comprehensive look at how The Beatles changes music forever.

Throughout the song-by-song recording history are informative details such as John Lennon’s purchase of a 1958 Rickenbacker 325 Capri for £100 in Hamburg, in 1960. Diving into The Beatles’ song and album recording process, readers discover that The Beatles’ first album, Please Please Me, was recorded in one epic 12-hour session in 1963 for £400. In contrast, they spent month after month in 1967 layering sounds on a four-track recorder to create their masterpiece, Sgt. Pepper’s Lonely Hearts Club Band.

In this first-of-its-kind book, every album and song recorded by The Beatles – from “Please Please Me” (U.S. 1963) to “The Long and Winding Road” (U.S. 1970) – are dissected and revealed anew. All the Songs is the must-have Beatles book for the any true Beatles fan.