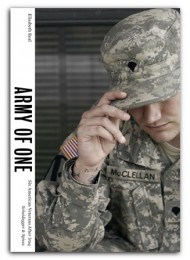 In Army Of One, photo journalist Elisabeth Real tells the story of six American veterans whose lives have been irreversibly altered by the war in Iraq. All but one of the veterans have been officially diagnosed with post-traumatic stress disorder (PTSD). From 2006–13, Elisabeth Real photographed and interviewed these young men, trying to find out what they have been going through and how, in turn, the consequences of their combat experience have affected their families at home.

Elisabeth Real breaks down numbers and statistics and focuses on the individual soldier: the lone-standing “Army Of One”. The book’s title derives from the recruiting slogan used by the U.S. Army’s until 2006. Real’s project Army Of One refers to the possibilities that the military has to offer: Be all you can be, take your future and your life into your hands, and you will be as powerful as a whole army. Yet for many soldiers, it takes on the opposite meaning: You are a warrior on your own and the US Army does not care at all about you as an individual human being. Many of the soldiers suffering from PTSD are left alone entirely. After Iraq—a conflict that the American public gradually kept losing interest in—the veterans keep fighting a war that they may never win.