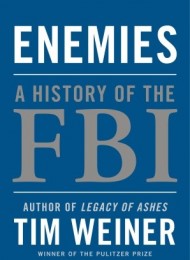 Enemies – A History of the FBI

Enemies is the first definitive history of the FBI’s secret intelligence operations, from an author whose work on the Pentagon and the CIA won him the Pulitzer Prize and the National Book Award.

We think of the FBI as America’s police force. But secret intelligence is the Bureau’s first and foremost mission. Enemies is the story of how presidents have used the FBI as the most formidable intelligence force in American history.

Here is the hidden history of America’s hundred-year war on terror. The FBI has fought against terrorists, spies, anyone it deemed subversive—and sometimes American presidents. The FBI’s secret intelligence and surveillance techniques have created a tug-of-war between protecting national security and infringing upon civil liberties. It is a tension that strains the very fabric of a free republic.