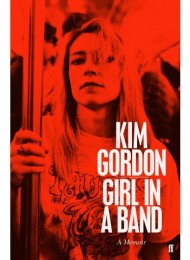 Girl in a Band

There are few artists who inspire such reverence as Kim Gordon. In Girl in a Band she tells with complete openness the story of her family, her work in the visual arts, her move to New York City, the men in her life, her marriage, her relationship with her daughter, her music and her band. It is a rich and beautifully written memoir, taking us back to the lost New York of the 1980s and ’90s that gave birth to and nurtured Sonic Youth and the alternative revolution in popular music they spearheaded. But at its core, Girl in a Band is an examination of what partnership means – and what happens when it dissolves.

Evocative and edgy, filled with the sights and sounds of a changing world and a remarkable life, Girl in a Band is the moving chronicle of an extraordinary artist.