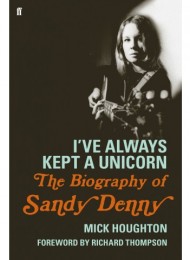 I’ve Always Kept a Unicorn – The Biography of Sandy Denny

I’ve Always Kept a Unicorn tells the story of Sandy Denny, one of the greatest British singers of her time and the first female British singer-songwriter to produce a substantial and enduring body of original songs. Sandy emerged from the passionate, hard-drinking folk scene of the sixties – a world of larger-than-life characters such as Alex Campbell, Bert Jansch, Jackson C. Frank, Anne Briggs and her future husband, the Australian singer Trevor Lucas. She then laid down the marker for folk-rock when she joined Fairport Convention in 1968, recording three albums with them before her shock departure in November 1969 just ahead of the release of the last, the seminal Liege & Lief.

Sandy was driven by a restless search for the perfect framework for her songs during the seventies. She first formed Fotheringay with Trevor Lucas, but left the group controversially after their eponymous debut album. This was followed by a historic one-off recording with Led Zeppelin, ‘The Battle of Evermore’ – Sandy is the only guest vocalist ever to record with the group – and four mercurial solo albums, as well as a return to Fairport Convention, before her tragic and untimely death in 1978, aged thirty-one, in circumstances still shrouded in hearsay and speculation.

Sandy’s often turbulent relationship with Trevor is at the core of her later life and work, as she tried to reconcile motherhood and marriage with the trappings of a rock ‘n’ roll lifestyle and a conflicted desire for the fame and success that others expected of her. Largely based on original and candid interviews with more than fifty of her friends, fellow musicians and contemporaries, and with access to previously unseen documents, photographs and Sandy’s own notebooks, this is Sandy’s story – that of a life never sung out of tune.