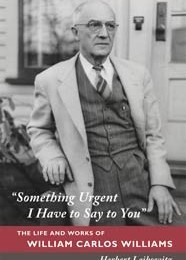 >> Order this book
Herbert A. Leibowitz

Something Urgent I Have to Say to You

Herbert Leibowitz’s “Something Urgent I Have to Say to You” provides a new perspective on the life and poetry of the doctor poet William Carlos Williams, a key American writer who led one of the more eventful literary lives of the twentieth century. Friends with most of the contemporary innovators of his era—Ezra Pound, James Joyce, Ford Madox Ford, and Louis Zukofsky, among others—Williams made a radical break with the modernist tradition by seeking to invent an entirely fresh and singularly American poetic, whose subject matter derived from the everyday lives of the citizens and poor immigrant com­munities of northern New Jersey. His poems mirrored both the conflicts of his own life and the convulsions that afflicted American soci­ety—two world wars, a rampaging flu pan-demic, and the Great Depression.

Leibowitz’s biography offers a compelling description of the work that inspired a seminal, controversial movement in American verse, as well as a rounded portrait of a complicated man: pugnacious and kindly, ambitious and insecure, self-critical and imaginative. “Something Urgent I Have to Say to You” is both a long-overdue assessment of a major American writer and an entertaining examination of the twentieth-century avant-garde art and poetry scene, with its memorable cast of eccentric pioneers, includ­ing Marcel Duchamp, Man Ray, Marianne Moore, and Gertrude Stein.