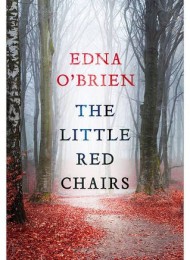 Ten years on from her last novel, Edna O’Brien reminds us why she is thought to be one of the great Irish writers of this and any generation.
When a wanted war criminal from the Balkans, masquerading as a faith healer, settles in a small west coast Irish village, the community are in thrall. One woman, Fidelma McBride, falls under his spell and in this astonishing novel, Edna O’Brien charts the consequences of that fatal attraction.
The Little Red Chairs is a story about love, the artifice of evil, and the terrible necessity of accountability in our shattered, damaged world. A narrative which dares to travel deep into the darkness has produced a book of enormous emotional intelligence and courage. Written with a fierce lyricism and sensibility, The Little Red Chairs dares to suggest there is a way back to redemption and hope when great evil is done. Almost six decades on from her debut, Edna O’Brien has produced what may be her masterpiece in the novel form.