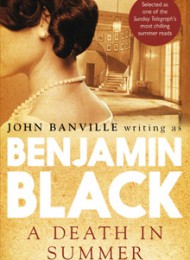 A Death in Summer

When newspaper magnate Richard Jewell is found dead at his country estate, clutching a shotgun in his lifeless hands, few see his demise as cause for sorrow. But before long Doctor Quirke and Inspector Hackett realise that, rather than the suspected suicide, ‘Diamond Dick’ has in fact been murdered.

Suspicion soon falls on one of Jewell’s biggest rivals. But as Quirke and his assistant Sinclair get to know Jewell’s beautiful, enigmatic wife Françoise d’Aubigny, and his fragile sister Dannie, as well as those who work for the family, it gradually becomes clear that all is not as it seems . . .

Against the backdrop of 1950’s Dublin, Benjamin Black conjures another atmospheric, beguiling mystery.