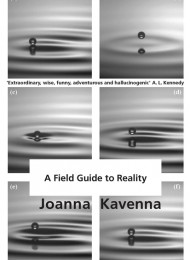 A Field Guide to Reality

A conceptual tour de force and a satire of pseudo-philosophy and literary devices, from the brilliantly comic ironist and Granta Best of Young British author

‘An extraordinary, wise, funny, adventurous and hallucinogenic book that combines fiction with gleefully warped fact. Kavenna explores the complex nature of reality and perception with vast imaginative energy and a generous spirit.’ A. L. Kennedy

Eliade Jencks knows the only reason people call at midnight is to tell you someone has died. Professor Solete was one of her few friends. Perhaps her only friend. But his friends don’t think much of her – a vague, scruffy waitress, impatient with philosophical onanism at parties. Naturally, they’re horrified to find out that Solete has left her his Field Guide to Reality.

The Guide has taken on legendary proportions among the celebrated minds of Oxford. The work of a lifetime, it purportedly advances Solete’s great philosophical Theory of Everything and even defines the very nature of reality. A big, important book. Only, they can’t find it.

So, baffled, grieving, and slightly annoyed, Eliade sets out on a quest for the missing manuscript, and falls down a rabbit-hole of metaphysical possibility. From a psychotropic tea party to the Priests of the Quantum Realm, she trips her way through Solete’s wonderland reality and, without quite meaning to, bursts open the boundaries of her own.

In this clever, darkly ironic and moving novel, Granta Best of Young British author Joanna Kavenna displays fearless originality and dread wit in confronting the strangeness of reality and how we contend with the disappearance of those we love.

Joanna Kavenna (Author)
Joanna Kavenna is the author of The Ice Museum, Inglorious (which won the Orange Prize for New Writing), The Birth of Love, Come to the Edge and A Field Guide to Reality. Her writing has appeared in the New Yorker, Guardian, Observer, Telegraph, Spectator, London Review of Books and New York Times and she has held writing fellowships at St Antony’s College Oxford and St John’s College Cambridge. In 2011 she was named as one of the Telegraph‘s 20 Writers Under 40 and in 2013 was listed as one of Granta’s Best of Young British Novelists. She lives in Oxfordshire.

Oly Ralfe (Illustrator)
Oly Ralfe is an artist, film-maker and musician. He collaborated with The Mighty Boosh and has recorded four music albums as Ralfe Band, including the soundtrack to the film Bunny and The Bull. His documentary films and music videos have won several awards.