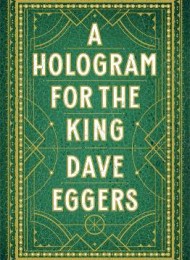 A Hologram for the King

In a rising Saudi Arabian city, far from weary, recession-scarred America, a struggling businessman pursues a last-ditch attempt to stave off foreclosure, pay his daughter’s college tuition, and finally do something great. In A Hologram for the King, Dave Eggers takes us around the world to show how one man fights to hold himself and his splintering family together in the face of the global economy’s gale-force winds. This taut, richly layered, and elegiac novel is a powerful evocation of our contemporary moment – and a moving story of how we got here.

‘A master of the surprising metaphor, Eggers’s great skill is in tracking the exuberant chaos of thought, with all its sudden poignancies and unexpected joys’ Daily Telegraph

‘Among the most influential writers in the English language’ GQ

Dave Eggers is the author of six previous books: A Heartbreaking Work of Staggering Genius, How We Are Hungry, You Shall Know Our Velocity, What is the What, The Wild Things and Zeitoun. Zeitoun was the winner of the American Book Award and the Dayton Literary Peace Prize and What is the What was a finalist for the 2006 National Book Critics Circle Award and won France’s Prix Medici. Eggers is the founder and editor of McSweeney’s, an independent publishing house based in San Francisco. A native of Chicago, he lives in Northern California with his wife and two children.