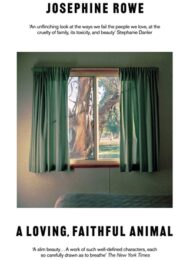 A haunting and vivid novel which excavates an Australia rarely seen in literature.

New Year’s Eve, 1990, small-town Australia. The mysterious death of the family dog pushes Jack, a Vietnam veteran suffering from severe PTSD, into one of his periodic vanishing acts. His eccentric brother Les remains next door, a gentle fixer-upper, whose loyalties are increasingly torn between Jack and his wife Evelyn. This time, Evelyn lets Jack stay gone. She is rapidly disappearing herself, lost in recollections of a vibrant youth as her eldest daughter Lani seems intent on misspending her own. And at the heart of it all is Lani’s little sister Ru, who sees everything and yet is overlooked.
A Loving, Faithful Animal is an unforgettable interrogation of ruins, redemption and reasons why.