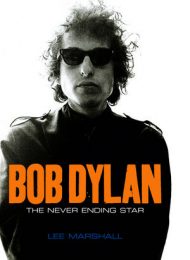 Bob Dylan’s contribution to popular music is immeasurable. Venerated as rock’s one true genius, Dylan is considered responsible for introducing a new range of topics and new lyrical complexity into popular music. Without Bob Dylan, rock critic Dave Marsh once claimed, there would be no popular music as we understand it today.

As such an exalted figure, Dylan has been the subject of countless books and intricate scholarship considering various dimensions of both the man and his music. This book places new emphasis on Dylan as a rock star. Whatever else Dylan is, he is a star – iconic, charismatic, legendary, enigmatic. No one else in popular music has maintained such star status for so long a period of time.

Showing how theories of stardom can help us understand both Bob Dylan and the history of rock music, Lee Marshall provides new insight into how Dylan’s songs acquire meaning and affects his relationship with his fans, his critics and the recording industry. Marshall discusses Dylan’s emergence as a star in the folk revival (the “spokesman for a generation”) and the formative role that Dylan plays in creating a new type of music – rock – and a new type of star. Bringing the book right up to date, he also sheds new light on how Dylan’s later career has been shaped by his earlier star image and how Dylan repeatedly tried to throw off the limitations and responsibilities of his stardom.

The book concludes by considering the revival of Dylan over the past ten years and how Dylan’s stardom has developed in a way that contains, but is not overshadowed by, his achievements in the 1960s.