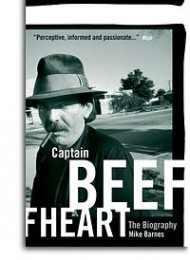 Following Don Van Vliet’s death Mike Barnes will look to reassess his legacy through new interview material and with reference to reports and eulogies that appeared in the media.

He will also be putting Van Vliet’s reclusiveness over the last two decades in context, now that it has been officially revealed that he was suffering from MS – his friends and representatives has always denied that he had a long term illness.

“Barnes gets the story, and with the full participation of those brave musicians who attempted to interpret Beefheart’s sometimes otherworldly methodology”
– The Times