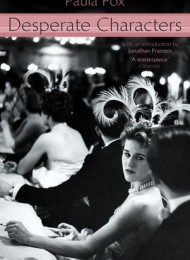 “A towering landmark of postwar Realism. . . . A sustained work of prose so lucid and fine it seems less written than carved.” – David Foster Wallace

Otto and Sophie Bentwood live childless in a renovated Brooklyn brownstone. The complete works of Goethe line their bookshelf, their stainless-steel kitchen is newly installed, and their Mercedes is parked curbside. But after Sophie is bitten on the hand while trying to feed a half-starved neighborhood cat, a series of small and ominous disasters begin to plague their lives. The fault lines of their marriage are revealed – echoing the fractures of society around them, slowly wrenching itself apart. First published in 1970 to wide acclaim, Desperate Characters stands as one of the most dazzling and rigorous examples of the storyteller’s craft in postwar American literature – a novel that, according to Irving Howe, ranks with “Billy Budd, The Great Gatsby, Miss Lonelyhearts, and Seize the Day.”

“Desperate Characters is, simply, a perfect short novel. A few characters, a small stretch of time; setting and action tightly confined – and yet, as in Tolstoy’s The Death of Ivan Ilyich, everything crucial within our souls bared.” – Andrea Barrett “This perfect novel about pain is as clear, and as wholly believable, and as healing, as a fever dream.” – Frederick Busch “Brilliant. . . . [Fox] is one of the most attractive writers to come our way in a long, long time.” – The New Yorker Introduced by Jonathan Franzen, one of Granta’s Twenty Best Young American Novelists