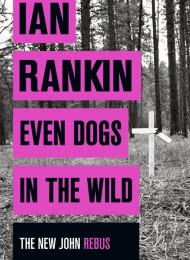 Even Dogs in the Wild

Retirement doesn’t suit John Rebus. He wasn’t made for hobbies, holidays or home improvements. Being a cop is in his blood.

So when DI Siobhan Clarke asks for his help on a case, Rebus doesn’t need long to consider his options.

Clarke’s been investigating the death of a senior lawyer whose body was found along with a threatening note. On the other side of Edinburgh, Big Ger Cafferty – Rebus’s long-time nemesis – has received an identical note and a bullet through his window.

Now it’s up to Clarke and Rebus to connect the dots and stop a killer.

Meanwhile, DI Malcolm Fox joins forces with a covert team from Glasgow who are tailing a notorious crime family. There’s something they want, and they’ll stop at nothing to get it.

Even Dogs in the Wild brings back Ian Rankin’s greatest characters in a story exploring the darkest corners of our instincts and desires.