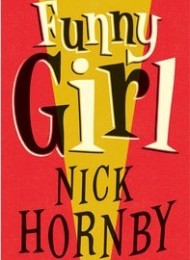 Barbara Parker is Miss Blackpool of 1964, but she doesn’t want to be a beauty queen. She wants to make people laugh, like her heroine Lucille Ball. So she leaves Blackpool and her family behind, takes herself off to London, and gets a job behind the cosmetics counter of a Kensington department store, while trying to work out how she can get herself noticed. A chance meeting with an agent results in a new name and an audition for a new BBC comedy series. Sophie Straw’s time has come.

Funny Girl is the story of a television programme, and the people responsible for it: the writers, Tony and Bill, friends since National Service and comedy obsessives; producer Dennis, Oxbridge- educated, clever, mild and devoted to his team in general and Sophie in particular; and Sophie’s good-enough looking co-star Clive, who feels that he’s destined for better things.

As the 1960s progress, and the British people fall in love with Sophie’s sitcom, the pleasures of teamwork begin to wane: nothing can stay good forever, and the mess of real life will always intrude.

Nick Hornby’s new novel, his first since Juliet, Naked, is about work, popular culture, youth and old age, fame, class and collaboration. It offers a captivating portrait of youthful exuberance and creativity at a time when Britain itself was experiencing one of its most enduring creative bursts.