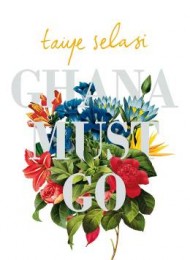 A stunning novel, spanning generations and continents, Ghana Must Go by rising star Taiye Selasi is a tale of family drama and forgiveness, for fans of Zadie Smith and Chimamanda Ngozi Adichie.
This is the story of a family — of the simple, devastating ways in which families tear themselves apart, and of the incredible lengths to which a family will go to put itself back together.It is the story of the Sais family, whose good life crumbles in an evening; a Ghanaian father, Kwaku Sai, who becomes a highly respected surgeon in the US only to be disillusioned by a grotesque injustice; his Nigerian wife, Fola, the beautiful homemaker abandoned in his wake; their eldest son, Olu, determined to reconstruct the life his father should have had; their twins, seductive Taiwo and acclaimed artist Kehinde, both brilliant but scarred and flailing; their youngest, Sadie, jealously in love with her celebrity best friend. All of them sent reeling on their disparate paths into the world. Until, one day, tragedy spins the Sais in a new direction.This is the story of a family: torn apart by lies, reunited by grief. A family absolved, ultimately, by that bitter but most tenuous bond: familial love.Ghana Must Go interweaves the stories of the Sais in a rich and moving drama of separation and reunion, spanning generations and cultures from West Africa to New England, London, New York and back again. It is a debut novel of blazing originality and startling power by a writer of extraordinary gifts.
“Ghana Must Go is both a fast moving story of one family’s fortunes and an ecstatic exploration of the inner lives of its members. With her perfectly-pitched prose and flawless technique, Selasi does more than merely renew our sense of the African novel: she renews our sense of the novel, period. An astonishing debut.” Teju Cole, author of Open City
Taiye Selasi was born in London and raised in Massachusetts. She holds a B.A. in American Studies from Yale and an M.Phil. in International Relations from Oxford. The Sex Lives of African Girls (Granta, 2011), Selasi’s fiction debut, appeared in Best American Short Stories 2012. She lives in Rome.