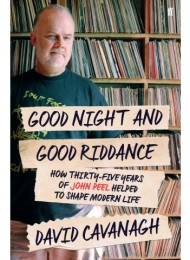 Goodnight and Good Riddance: How Thirty-Five Years of John Peel Helped to Shape Modern Britain is a social history, a diary of a nation’s changing culture, and an in-depth appraisal of one of our greatest broadcasters, a man who can legitimately be called the most influential figure in post-war British popular music.

Without the support of John Peel, it’s unlikely that innumerable artists – from David Bowie to Dizzee Rascal, Jethro Tull to Joy Division – would have received national radio exposure. But Peel’s influence goes much deeper than this. Whether he was championing punk, reggae, jungle or grime, he had a unique relationship with his audience that was part taste-maker, part trusted friend.

The book focuses on some 300 shows between 1967 and 2004, giving a thorough overview of Peel’s broadcasting career and placing it in its cultural and social contexts. Peel comes alive for the reader, as do the key developments that kept him at the cutting edge – the changes in his tastes; the changes in his thinking. Just like a Peel show, Goodnight and Good Riddance is warm, informative and insightful, and wears its enthusiasm proudly.