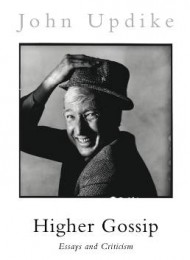 ‘Gossip of a higher sort’ was how the incomparable John Updike described the art of the review. Here then is the last collection of his best, most dazzling gossip. Influential reviews of Toni Morrison, John le Carré and Ann Patchett and expert critique on exhibitions of El Greco, Van Gogh and Schiele are included alongside previously uncollected short stories, poems and essays on his ‘pet topics’.

Following earlier prose collections More Matter and Due Considerations, Updike began compiling Higher Gossip shortly before his death in 2009. Displaying his characteristic humour and insight on subjects as varied as ageing, golf, dinosaurs, make-up and his own fiction, the delightful Higher Gossip bookends a legacy of over fifty celebrated titles.

This is essential reading for admirers of the deeply missed John Updike, and for any who profess a love for art and literature.