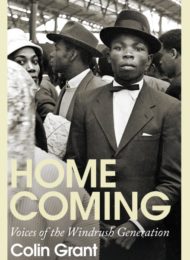 Homecoming – Voices of the Windrush Generation

When Colin Grant was growing up in Luton in the 1960s, he learned not to ask his Jamaican parents why they had emigrated to Britain. ‘We’re here because we’re here,’ his father would say. ‘You have some place else to go?’

But now, seventy years after the arrival of ships such as the Windrush, this generation of pioneers are ready to tell their stories.

Homecoming draws on over a hundred first-hand interviews, archival recordings and memoirs by the women and men who came to Britain from the West Indies between the late 1940s and the early 1960s. In their own words, we witness the transition from the optimism of the first post-war arrivals to the race riots of the late 1950s. We hear from nurses in Manchester; bus drivers in Bristol; seamstresses in Birmingham; teachers in Croydon; dockers in Cardiff; inter-racial lovers in High Wycombe, and Carnival Queens in Leeds. These are stories of hope and regret, of triumphs and challenges, brimming with humour, anger and wisdom. Together, they reveal a rich tapestry of Caribbean British lives.

Homecoming is an unforgettable portrait of a generation, which brilliantly illuminates an essential and much-misunderstood chapter of our history.