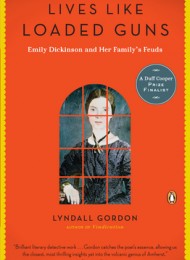 Lives Like Loaded Guns – Emily Dickinson and Her Family’s Feuds

In 1882, Emily Dickinson’s brother, Austin, began an adulterous love affair with the accomplished and ravishing Mabel Todd, setting in motion a series of events that would forever change the lives of the Dickinson family. Award-winning biographer Lyndall Gordon tells the story of the feud that erupted-and that still continues today. Making unprecedented use of letters, diaries, and legal documents, Gordon proposes a groundbreaking new solution to the secret behind the poet’s insistent seclusion, presenting a woman beyond her time who found love, spirituality, and immortality all on her own terms.

The first major biography of Dickinson in nearly ten years, Lives Like Loaded Guns is a highly acclaimed story of creative genius, illicit passion, and betrayal that will forever change the way we view one of America’s most important literary figures.