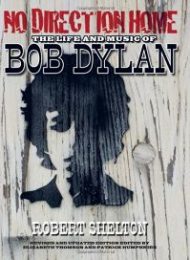 Robert Shelton met Bob Dylan when the young singer first arrived in New York. He became Dylan’s friend, champion, and critic. This book, first published in 1986, was hailed as the definitive unauthorized biography of this moody, passionate genius and his world. Dylan gave Shelton access to his parents, Abe and Beatty Zimmerman – whom no other journalist has ever interviewed in depth; to his brother, David; to childhood friends from Hibbing; to fellow students and friends from Minneapolis; and to Suze Rotolo, the muse immortalized on the cover of Freewheelin’, among others. No Direction Home took 20 years to complete and received widespread critical acclaim. Two decades on, Dylan’s standing is higher than at any time since the 1960s and Shelton’s book is now seen as a classic of the genre. Today, everything Bob Dylan does guarantees saturation media coverage, and a new edition of No Direction Home is long overdue. This new edition, published to coincide with Dylan’s 70th birthday on May 24, 2011, restores significant parts of Shelton’s original manuscript and also includes key images of Dylan throughout his incredible, enduring career, alongside updated footnotes and bibliography, and a new selective discography, making it a must for all Dylan aficionados.