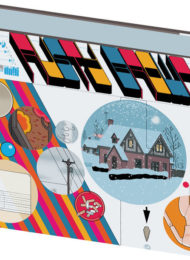 A major graphic novel event more than 18 years in progress: part one of the ongoing bifurcated masterwork from the brilliant and beloved author of Jimmy Corrigan: The Smartest Kid on Earth and Building Stories.

Rusty Brown is a fully interactive, full-color articulation of the time-space interrelationships of three complete consciousnesses in the first half of a single midwestern American day and the tiny piece of human grit about which they involuntarily orbit. A sprawling, special snowflake accumulation of the biggest themes and the smallest moments of life, Rusty Brown literately and literally aims at nothing less than the coalescence of one half of all of existence into a single museum-quality picture story, expertly arranged to present the most convincingly ineffable and empathetic illusion of experience for both life-curious readers and traditional fans of standard reality. From childhood to old age, no frozen plotline is left unthawed in the entangled stories of a child who awakens without superpowers, a teen who matures into a paternal despot, a father who stores his emotional regrets on the surface of Mars and a late-middle-aged woman who seeks the love of only one other person on planet Earth.