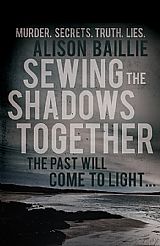 Sewing the Shadows Together

Can you ever get over the death of your sister? Or of your best friend?

More than 30 years after 13-year-old Shona McIver was raped and murdered in Portobello, the seaside suburb of Edinburgh, the crime still casts a shadow over the lives of her brother Tom and her best friend Sarah.

“Shona had been gone for so long but the memories still came unexpectedly, sometimes like a video from the past, sometimes distorted dreams, but she was always there.”

When modern DNA evidence shows that the wrong man was convicted of the crime, the case is reopened. So who did kill Shona? Sarah and Tom are caught up in the search for Shona’s murderer, and suspicions fall on family and friends. The foundations of Sarah’s perfect family life begin to crumble as she realises that nothing is as it appears. Dark secrets from the past are uncovered, and there is another death, before the identity of the real killer is finally revealed…

Set in Edinburgh, the Outer Hebrides and South Africa, Sewing the Shadows Together is a thoroughly modern murder mystery that keeps the reader guessing to the end. Filled with characters who could easily be friends, family or people we work with, it asks the question:

Do we ever really know the people closest to us?