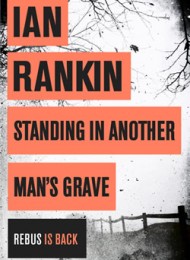 Standing in Another Man’s Grave

It’s twenty-five years since John Rebus appeared on the scene, and five years since he retired. But 2012 sees his return in STANDING IN ANOTHER MAN’S GRAVE. Not only is Rebus as stubborn and anarchic as ever, but he finds himself in trouble with Rankin’s latest creation, Malcolm Fox of Edinburgh’s internal affairs unit. Added to which, Rebus may be about to derail the career of his ex-colleague Siobhan Clarke, while himself being permanently derailed by mob boss and old adversary Big Ger Cafferty. But all Rebus wants to do is discover the truth about a series of seemingly unconnected disappearances stretching back to the millennium. The problem being, no one else wants to go there – and that includes Rebus’s fellow officers. Not that any of that is going to stop Rebus. Not even when his own life and the careers of those around him are on the line.