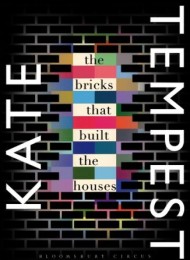 The Bricks that Built the Houses

Award-winning poet and rapper Kate Tempest’s electrifying debut novel takes us into the beating heart of the capital in this multi-generational tale of drugs, desire and belonging.

It gets into your bones. You don’t even realise it, until you’re driving through it, watching all the things you’ve always known and leaving them behind.

Young Londoners Becky, Harry and Leon are leaving town in a fourth-hand Ford Cortina with a suitcase full of money. They are running from jealous boyfriends, dead-end jobs, violent maniacs and disgruntled drug dealers, in the hope of escaping the restless tedium of life in south-east London – the place they have always called home.

As the story moves back in time, to before they had to leave, we see them torn between confidence and self-loathing, between loneliness and desire, between desperate ambition and the terrifying prospect of getting nothing done.

In The Bricks that Built The Houses Kate Tempest explores contemporary city life with a powerful moral microscope, giving us irresistible stories of hidden lives, and showing us how the best intentions don’t always lead to the right decisions.

Anyone familiar with Tempest’s album Everybody Down will feel uncannily familiar with Bricks as it follows the lives of Becky, Harry and Pete through the highs of love and cocaine and the hangovers following both until the lovers drive into the unknown world, out of South London. By speaking about the people, Bricks speaks about Tempest’s home, its complicated demography and the history it contains. Despite this being a prose text, Tempest displays her love and talent for poetry, which usually packs a punch but sometimes - rarely - drifts into the abstract. Now, whatever you do, don’t forget about Woolf’s Mrs. Dalloway, Gaiman’s Neverwhere or Zadie Smith, but know that the latest great London novel has been published with The Bricks that Built the Houses. Max Lauber