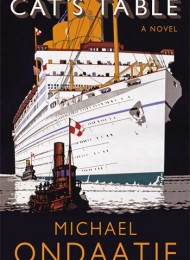 In the early 1950s, an eleven-year-old boy boards a huge liner bound for England – a ‘castle that was to cross the sea’. At mealtimes, he is placed at the lowly ‘Cat’s Table’ with an eccentric group of grown-ups and two other boys, Cassius and Ramadhin. As the ship makes its way across the Indian Ocean, through the Suez Canal, into the Mediterranean, the boys become involved in the worlds and stories of the adults around them, tumbling from one adventure and delicious discovery to another, ‘bursting all over the place like freed mercury’. And at night, the boys spy on a shackled prisoner – his crime and fate a galvanizing mystery that will haunt them forever.

As the narrative moves from the decks and holds of the ship and the boy’s adult years, it tells a spellbinding story about the difference between the magical openness of childhood and the burdens of earned understanding – about a life-long journey that began unexpectedly with a spectacular sea voyage, when all on board were ‘free of the realities of the earth’.

With the ocean liner a brilliant microcosm for the floating dream of childhood, The Cat’s Table is a vivid, poignant and thrilling book, full of Ondaatje’s trademark set-pieces and breathtaking images: a story told with a child’s sense of wonder by a novelist at the very height of his powers.