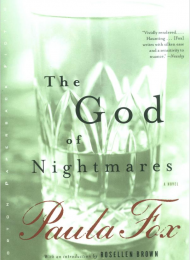 The God of Nightmares

What fascinates me about Paula Fox ist the way she introduces people to me and how she lets me go into my own relationship with them. I get to know different characters, different stories but also often recognize myself with my own conclucions or experiences. Her father died 13 years after he had left Helens mother. At this moment, the mother sent Helen to go and get her sister Lulu from New Orleans. But Helens aunt Lulu didnt want to leave the town at all, too fascinating was her life there as an elderly alcoholic. She was shepherded by different interesting people, as for instance Len, a very young man with a rather irritating relationship to Lulu. Then youll meet Catherine, wo arranged the room she left to Helen like a picture from the bedroom of Van Gaugh. Her partner Gerald has lyrics such as Chaucer, die Odyssee und die Ilias, Keats, Walt Whitman, William Carlos Williams, Hart Crane, John Donne on his bookshelf. Or the homosexual Claude, who celebrates in the evenings his drink to the god of the nightmares, an amber-colored liquid. There is Nina who became Helens best friend. Times in New Orleans were very impressive for Helen, she never forgot this period of her life. She married Len and brought up a daughter together with him. Her life was quiet and successful until this moment, where she recognizes that her acting as an innocent (or was she really innocent?) turned in a painful way towards her.