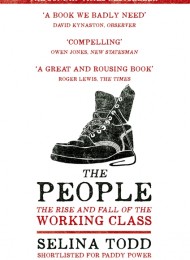 What was it really like to live through the twentieth century? In 1910 three-quarters of the population were working class, but their story has been ignored until now.

Based on the first-person accounts of servants, factory workers, miners and housewives, award-winning historian Selina Todd reveals an unexpected Britain where cinema audiences shook their fists at footage of Winston Churchill, communities supported strikers and pools winners (like Viv Nicholson) refused to become respectable. Charting the rise of the working class, through two world wars to their fall in Thatcher’s Britain and today, Todd tells their story for the first time, in their own words.

Uncovering a huge hidden swathe of Britain’s past, The People is the vivid history of a revolutionary century and the people who really made Britain great.