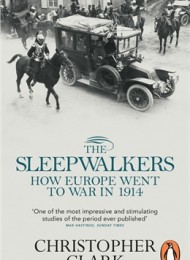 The pacy, sensitive and formidably argued history of the causes of the First World War, from acclaimed historian and author Christopher Clark

SUNDAY TIMES and INDEPENDENT BOOKS OF THE YEAR 2012
The moments that it took Gavrilo Princip to step forward to the stalled car and shoot dead Franz Ferdinand and his wife were perhaps the most fateful of the modern era. An act of terrorism of staggering efficiency, it fulfilled its every aim: it would liberate Bosnia from Habsburg rule and it created a powerful new Serbia, but it also brought down four great empires, killed millions of men and destroyed a civilization. What made a seemingly prosperous and complacent Europe so vulnerable to the impact of this assassination?

In The Sleepwalkers Christopher Clark retells the story of the outbreak of the First World War and its causes. Above all, it shows how the failure to understand the seriousness of the chaotic, near genocidal fighting in the Balkans would drag Europe into catastrophe.