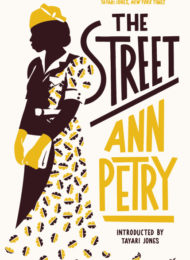 With a new introduction by TAYARI JONES, author of An American Marriage and winner of the Women’s Prize for Fiction 2019.

‘Ann Petry’s first novel, The Street, was a literary event in 1946, praised and translated around the world – the first book by a black woman to sell more than a million copies . . . Her work endures not merely because of the strength of its message but its artistry’ NEW YORK TIMES

‘My favorite type of novel, literary with an astonishing plot . . . insightful, prescient and unputdownable’ TAYARI JONES

New York City, 1940s. In a crumbling tenement in Harlem, Lutie Johnson is determined to build a new life for herself and her eight-year-old boy, Bub – a life that she can be proud of. Having left her unreliable husband, Lutie believes that with hard work and resolve, she can begin again; she has faith in the American dream. But in her struggle to earn money and raise her son amid the violence, poverty and racial dissonance of her surroundings, Lutie is soon trapped: she is a woman alone, ‘too good-looking to be decent’, with predators at every turn.