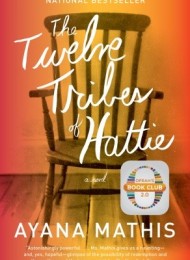 The Twelve Tribes of Hattie

In 1923, fifteen-year-old Hattie Shepherd, swept up by the tides of the Great Migration, flees Georgia and heads north. Full of hope, she settles in Philadelphia to build a better life. Instead she marries a man who will bring her nothing but disappointment, and watches helplessly as her firstborn twins are lost to an illness that a few pennies could have prevented. Hattie gives birth to nine more children, whom she raises with grit, mettle, and not an ounce of the tenderness they crave. She vows to prepare them to meet a world that will not be kind. Their lives, captured here in twelve luminous threads, tell the story of a mother’s monumental courage—and a nation’s tumultuous journey.

Ayana Mathis is a graduate of the Iowa Writers’ Workshop and is a recipient of the Michener-Copernicus Fellowship. Her first novel, The Twelve Tribes of Hattie, was a New York Times Bestseller and was selected by Oprah Winfrey as the second pick for Oprah’s Book Club 2.0. Originally from Philadelphia, she lives in Brooklyn.