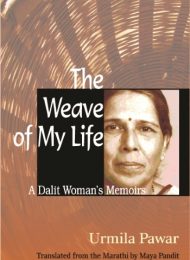 The Weave of My Life

Activist and award-winning writer Urmila Pawar recounts three generations of Dalit women who struggled to overcome the burden of their caste. Dalits, or untouchables, make up India’s poorest class. Forbidden from performing anything but the most undesirable and unsanitary duties, for years Dalits were believed to be racially inferior and polluted by nature and were therefore forced to live in isolated communities.

Pawar grew up on the rugged Konkan coast, near Mumbai, where the Mahar Dalits were housed in the center of the village so the upper castes could summon them at any time. As Pawar writes, “the community grew up with a sense of perpetual insecurity, fearing that they could be attacked from all four sides in times of conflict. That is why there has always been a tendency in our people to shrink within ourselves like a tortoise and proceed at a snail’s pace.” Pawar eventually left Konkan for Mumbai, where she fought for Dalit rights and became a major figure in the Dalit literary movement. Though she writes in Marathi, she has found fame in all of India.

In this frank and intimate memoir, Pawar not only shares her tireless effort to surmount hideous personal tragedy but also conveys the excitement of an awakening consciousness during a time of profound political and social change.