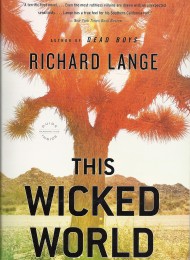 Former Marine Jimmy Boone – once a bodyguard to the rich and famous – is now
on parole and trying to keep his nose clean. But when Boone helps a buddy look
into a mysterious death, one small effort to do the right thing plunges him once again
into a world of trouble.  Along the dangerous margins of Los Angeles, he encounters
down-on-their-luck drug dealers, a vengeful stripper, a dogfighting ring, a beautiful
ex-cop, a vicious crime boss and his crew, and a fortune in counterfeit bills.
Before long, Boone’s quest to get at the truth looks mor like suicide than redemption.
This Wicked World is a knockout blend of superb writing and breakneck storytelling
from a novelist, who, as Michael Connelly says, “breathes new life into the mythology
of Los Angeles.”