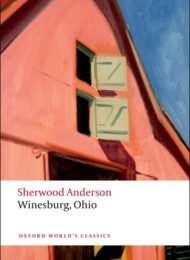 Winesburg, Ohio (1919) is Sherwood Anderson’s masterpiece, a cycle of short stories concerning life in a small Ohio town at the end of the nineteenth century. At the centre is George Willard, a young reporter who becomes the confidant of the town’s `grotesques’ – solitary figures unable to communicate with others. George is their conduit for expression and solace from loneliness, but he has his own longings which eventually draw him away from home to seek a career in the city. He carries with him the dreams and unuttered words of remarkable characters such as Wing Biddlebaum, the disgraced former teacher, and the story-telling Doctor Parcival.

The book has influenced many American writers, including ernest hemingway, William Faulkner, John Updike, Raymond Carver, and Joyce Carol Oates. It reshaped the development of the modern short story, turning the genre away from an emphasis upon plot towards a capability for illuminating the emotional lives of ordinary people.

This new edition corrects errors in earlier editions and takes into account major criticism and textual scholarship of the last several decades.

ABOUT THE SERIES: For over 100 years Oxford World’s Classics has made available the widest range of literature from around the globe. Each affordable volume reflects Oxford’s commitment to scholarship, providing the most accurate text plus a wealth of other valuable features, including expert introductions by leading authorities, helpful notes to clarify the text, up-to-date bibliographies for further study, and much more.