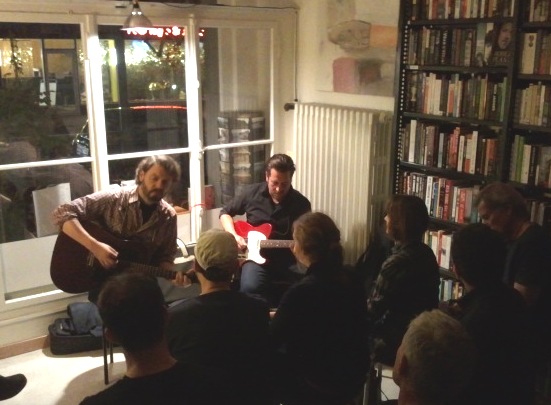 Growing up in a small town in central Tennessee, Stephen Simmons kept his radio tuned to the country station, where the sounds of Don Williams and Waylon Jennings were never more than a few tunes away.  Simmons treated those songwriters like school teachers, showing Simmons how to deliver a story, turn a phrase and pack a punch. By the time he released his debut album in 2004, though, Simmons had also learned how to rock. The result was Last Call, a record that had more in common with rootsy, electrified rockers like Neil Young than ‘70s crooners like Charlie Rich.Years later, Simmons has a few more roots-rock albums under his belt… as well as a new one, Hearsay, that doesn’t fall into the same category. Full of old-school twang and classic storytelling, it’s the sound of an artist getting back to his roots.“This album really started with me and my friends getting together late at night, trying to recreate that ‘70s country feel of a classic Don Williams album,” he says. “I’d bring a bottle of Irish Whiskey, we’d listen to some records, then I’d pull out a song I’d written that fit that era. We’d all play it live, two or three times, and that was it.  It really started out just for fun.”

Simmons took a break halfway through the project to finish his last album, The Big Show. He hit the road after The Big Show’srelease, playing shows throughout America and Europe, hitting nine countries along the way. Those whiskey-soaked nights in Nashville were never far from his mind, though, and Simmons restarted the project as soon as he returned home. It was worth the wait.

“I stuck to the original schedule, when the original crew was all in town and we could all get together,” he explains. “It stretched out over a year, but I knew after we’d recorded several songs that I loved the tracks and wanted to release them. To me, it felt less like an Americana album and more like the ‘70s country albums I love. These songs about winning and losing love, even in odd places like truck stop strip clubs and adult bookstores, kinda harken back to some of that era’s heartbreak songs, which were sung with a wink and a nod.”

Simmons self-produced the album, filling its 11 tracks with acoustic guitar, brushed percussion, swooning pedal steel, B-3 organ and his own alt-country croon.  Nashville-area musicians Eric Fritsch (Sheryl Crow), Jen Gunderman (Kris Kristofferson), Tim Marks (Will Hoge), Martin Lynds (Chuck Mead), Dave Coleman (The Coalmen) and Alex McCollough (The Wrights) pitched in, too.  Strapped for cash, he turned to his fans for help, launching a Kickstarter campaign to help rustle up enough funding. It was his second Kickstarter project… and this time, three times as many people contributed money.

“I still think crowd funding is one of the most positive developments to come down the pike in the past ten years for artists,” he says. “Lots of gloom and doom for the music business, but I think this is a silver lining.”