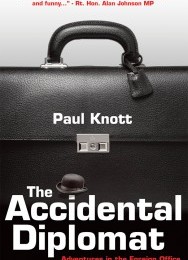 Its author, Paul Knott, is an ordinary Northern lad who began his working life in a hut on Hull’s King George Dock before an improbable career switch to Her Majesty’s Diplomatic Service. Tied up in a series of significant world events during two decades spent globetrotting on official duties, his story offers an illuminating insight into the most discreet of the UK’s great offices of state, the Foreign and Commonwealth Office. It blends the political with the personal to paint a vivid picture of the exciting and often absurd life of a Crown emissary.

Knott’s first posting to post-revolutionary Romania is a punishment for insubordination, but he finds the rampant eccentricity of a country striving to emerge from the Ceauşescu dictatorship inspiring and uproarious. A superficially more attractive but ultimately soulless sojourn in Dubai is enlivened when he is abducted at gunpoint by hospitality terrorists, before a happier time in the police-state of Uzbekistan, where he takes a hands-on approach to pursuing human rights and, with greater success, a gorgeous Kenyan lawyer.

His year in Kiev offers a close-up view of events underlying the ongoing crisis in Ukraine, several James Bond moments and an encounter with a wounded gangster. He is then unexpectedly beguiled by the offbeat charms of Belgium and the EU before his remarkable ride ends in Russia. The great land of contradictions proves both appealing and appalling, not least when a former Russian spy is murdered in London by radiation poisoning.

‘The hilarious and engrossing tale of how one ordinary bloke from Hull stumbled onto the world political stage by accident…’ Russ Litten, Author of Scream if You Want to Go Faster and Swear Down