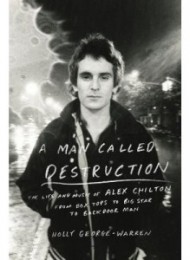 A Man Called Destruction – The Life and Music of Alex Chilton

A brilliant songwriter, virtuosic vocalist, and accomplished guitarist, the charismatic Alex Chilton was not only a bona fide rock star but perhaps the ultimate cult icon – one whose death on March 17, 2010, brought tributes from the New York Times to the House of Representatives.  Chilton’s career began with the 1967 hit ‘The Letter,’ on which the sixteen-year-old singer sang in a raspy baritone and created one of the epochal recordings of the era.  But rather than following the usual rags-to-riches trajectory, Chilton worked his way downward; after stints in the chart-topping Box Tops and critically acclaimed, pioneering Big Star, he spent a decade experimenting with punk and roots music, eventually stepping away from his career and taking menial jobs as a dishwasher, janitor, and tree trimmer in New Orleans.  By the mid-’90s, however, he rose again as an influential solo artist, producer, and trendsetter, with any number of indie bands laying claim to his legacy.

Award-winning journalist Holly George-Warren’s A Man Called Destruction is the first biography of Chilton and a revelatory portrait of this extraordinary artist.  Chilton had an unusual upbringing as a well-born Memphis ‘art brat,’ the son of a jazz musician father and art dealer mother, but shadows hung over a life that seemed outwardly charmed.  ‘The Letter’ brought him instant fame followed by six Top 40 hits, yet the ever-restless Chilton left the Box Tops in 1970, spent a year in New York honing his craft as a songwriter, and eventually joined seminal power-pop band Big Star.  Despite classic tracks like ‘September Gurls,’ ‘In the Street,’ and ‘Thirteen,’ commercial success eluded the group, although artists such as R.E.M., Wilco, the Replacements, and Counting Crows widely cite Chilton and Big Star as inspirations.

Following Big Star’s flameout, Chilton’s solo career found him drifting through New York City’s punk scene, recording ‘Bangkok’ and producing the Cramps.  After recording the shambolic Like Flies on Sherbert, he eventually landed in New Orleans. There, after a period of abstinence and manual labor, he experienced an artistic rebirth.  Chilton not only began recording and writing again, developing a new devoted fan base, but be began touring, ultimately reuniting with both Big Star and the Box Tops in the 1990s.

A Man Called Destruction is both the story of an extraordinary musician and a richly detailed chronicle of pop music’s evolution from the mid-1960s through indie rock, in which Alex Chilton will always play a central role.