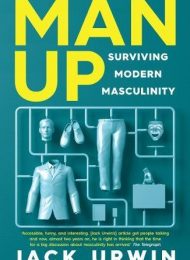 WHAT DOES MASCULINITY ADD UP TO IN THE 21ST CENTURY?

Jack Urwin traces modern ideas of masculinity from the inability of older generations to deal with the horrors of war, to the mob mentality of football terraces or Fight Club and the disturbing rise of mental health problems among men – especially young men – today.

While we struggle with the idea that there is a single version of masculinity worth aspiring to, depression and suicide among men have reached unprecedented levels. Man Up looks at the challenges and pressures on men today, and suggests ways to survive.

Jack Urwin, 24, is a journalist and a frequent contributor to Vice magazine, among other publications, who writes on pop culture, mental health, and music. His piece for Vice on his father’s death A Stiff Upper Lip is Killing British Men was instantly shared tens of thousands of times around the world, and was called ‘fabulous’ by Irvine Welsh. This is Jack’s first book.