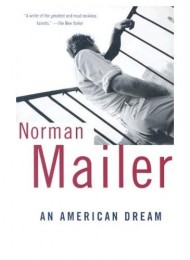 You must have read Norman Mailer. Not only because he passed away recently and not because he was alive until these days. And you must have read Mailer, not although he was homophobic, a heavy drinker, a sexist, a roughneck, a lefty, co-founder of Village Voice and president of the North American PEN-Club-Section. And not because he hurt one of his nine wives with a knife and attacked the homosexual intellectual Gore Vidal. Not because Mailer defended Günter Grass’ Nazi-background. No, you must have read him because he was all that and has done all that. Because not only did he keep records of the contradictions and abysses of the American dream, he also incorporates them. Because he was a sharp-witted analyst of the American society. Because he was a bright guy and because he wrote “The American Dream”: a cynical, witty, profound, brutal and ludicrous reckoning with the North American establishment of the 60ies. – A story like a song by the Stones from those days: raw, sexy, genuine, a little cribbed, kind of dusty, some sort of a contemporary document, not a masterpiece but very, very good. You don’t have to like Norman Mailer. You just have to read him.